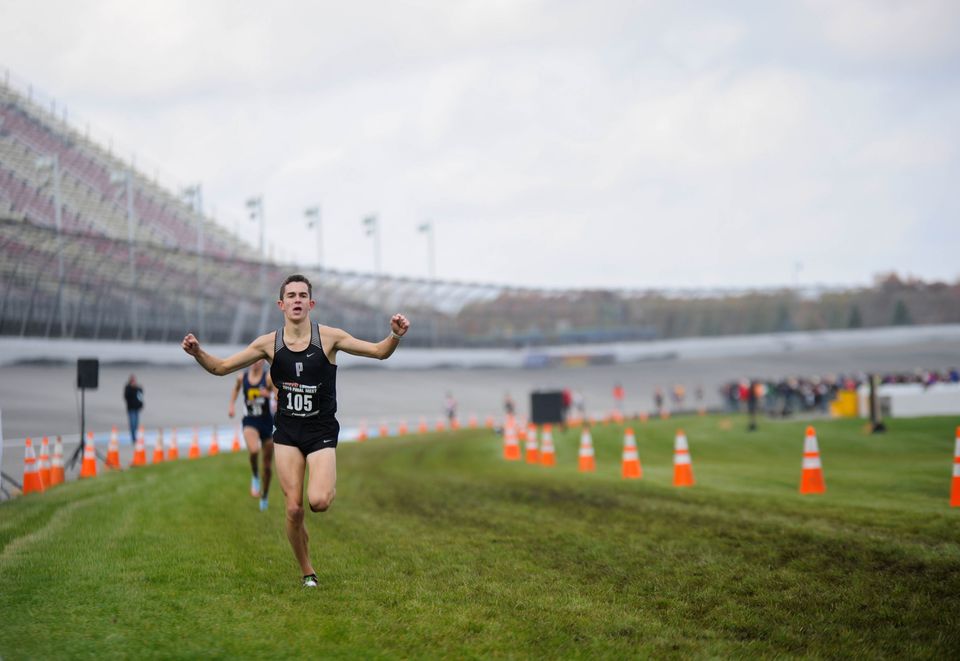 Congratulations to Senior Carter Solomon on not only an undefeated regular season, but to also capture Plymouth’s and P-CEP’s first ever individual state championship in cross country! His time of 15:01 led all athletes through all races on the day and turned in one of the most impressive careers in MHSAA cross country history. Solomon secures four-time All-State status with the victory on Saturday. He raced to 18th place his freshman year, 5th his sophomore year, a runner-up finish a year ago and capping off with a win in his final year as a Wildcat. Only two other athletes in the past 20 years have achieved this feat, one being his on-course rival in Brighton’s Zacahry Stewart who finished 4th on the day for the 2nd straight year.

Weather and course conditions at Michigan International Speedway did not yield impressive times by any means, but that did not stop the Plymouth boys varsity cross country team from running after their end-of-season goals. The biggest goal for the team was to have three All-State athletes and the boys were able to achieve that goal as Solomon, Senior Tyler Mussen and Junior Patrick Byrnes all broke into the top 30 places.

Byrnes had an extremely impressive race as he finished in 5th place in 15:33. He becomes one of the top returning athletes going into next season. Mussen was able to take the final All-State spot as he crossed the line in 30th place with a time of 16:04. With three All-State athletes, that surpasses the record of two athletes with All-State status that has happened for the ‘Cats the past three years. The three All-Staters will look to continue with some post-season success as they will prepare for the Foot Locker Regional Championships in Kenosha, WI in a few weeks.

With the team qualifying for the State Finals, the boys were able to reach 12th place. Also scoring for the Wildcats were junior Conner Davis (192nd, 17:20) and senior Matthew Biros (198th, 17:22).