Plymouth High School and Cass Tech High School share a city but not much else. The Detroit area schools don’t regularly face each other in varsity sports and their student bodies come from different socioeconomic and racial backgrounds. But earlier this fall, they came together through RISE for the sake of building bridges across communities. Plymouth and Cass Tech Boys Varsity Soccer teams held a RISE game September 7 at The Corner Ballpark at Detroit PAL, the site of RISE’s Midwest office. Before the field became the site for their competitive match, the two teams took the field together, and participated in RISE leadership activities. The activities focused on identity and diversity, and challenged players to better understand each other’s perspectives and how they as student-athletes can be leaders for tolerance and inclusion in their schools and community.
“There’s more than one way of viewing the world and it’s important to understand different perspectives, and the best way to do that is by interacting with different people,” said Luke Winters, a senior co-captain at Plymouth. “It was fun to bring different cultures together and play a game in Detroit like that. We all have the same love for the game and we’re all made equal, no matter religion or race, so it’s important we treat each other with respect.”
“For me, it was a good experience to mix in with people you don’t see every day, colors you don’t see every day,” said Joshua Hernandez, a junior captain at Cass Tech. “It showed you can interact with people who are different than you, especially when you have something that connects you and that’s the game. Soccer connects everybody.”
Plymouth won the game 3-2, but both coaches agreed the more valuable lessons were learned off the field. RISE’s multi-week leadership program has been administered with various teams and sports at both schools over the past four years, but the opportunity to experience RISE’s curriculum with students from other schools and backgrounds allowed for deeper engagement.
“I think some of the boys recognized the privilege that they have, and being able to recognize that helps you be aware and understand what that means and the relationships you have when you’re exposed to other cultures,” said Plymouth Coach Glenn Liguori. “On our team, it’s not a highly diverse group when it comes to race, but they were able to recognize what it means to be diverse beyond that and understand the importance of the language people use when talking about race and diversity and that came up a few times throughout the season.”
“For us here at Cass, we represent a mosaic. We have Mexican kids, Honduran kids, students from Africa, Hindu students, Muslim students. That’s who we are,” said Cass Tech Coach Phillip Jack. “So for us, with RISE, it was a great fit to be a part of this.”
The schools plan to continue facilitating RISE programming for their student-athletes and hope to continue spreading the message of unity and diversity in an annual RISE game going forward.
“We want to help get the word out about the RISE program so that when we have the game again next year we can bring together more schools and you can see how this program impacts these kids,” said Liguori. “It creates an inclusive environment.”
“We want to share with the rest of the community in Detroit that racial differences don’t matter when it comes to winning,” said Jack. “If you look at our team, that doesn’t matter. Our team is diverse, and we want to make sure we can project that message that you can operate with one voice and win with diversity. We want to share the experience we have here so other people can see that unity is easily achieved. RISE happened to be the perfect vehicle for us to show the world that.” 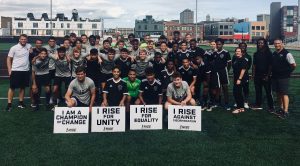