The Plymouth Girls Swim and Dive team competed in the KLAA Conference Championships Thursday, November 7th through Saturday, November 9th. Overall the team finished in 5th place out of 16 teams. There were many stand out swims and dives from the weekend. Plymouth came out of the gate fast, with the team of Senior Captain Liz Breda, Sophomore Bre Beringer, Sophomore Brady Kendall and Senior Captain Regan Peregord finishing 3rd in the 200 Medley Relay. This impressive performance was followed up by two strong swims in the 200 Freestyle from Freshman Ella Hornbacher and Sophomore Ava Gullitti, finishing 11th and 15th respectively. Breda kept the ball rolling with an impressive 9th place finishing, smashing the competition in the B Final of the 200 Individual Medley. The 50 Freestyle was a stand out event for the Wildcats, having three girls make finals in the event; Sophomore Ella Pierzecki finished 19th, Peregord finished 7th and Kendall won the event and set a new Brighton High School pool record.

Diving was next and Senior Captain Shelby Marocco and Junior Abby McCall put in impressive performances, placing 15th and 18th respectively. The swimming resumed with the 100 Butterfly, in which Beringer finished 16th and Kendall took first, setting another Brighton High School pool record, as well as a new KLAA Conference record and Plymouth Wildcats team record. Keeping the momentum going, the Wildcats had three athletes qualify for finals in the 100 Freestyle; Freshman Jackie Stoddard finished in 18th, Pierzecki in 17th and Peregord in 5th. In the 500 Freestyle, Hornbacher placed 10th and Gullitti 15th, the highest finishes for the Wildcats in this event in multiple years. Next was the 200 Freestyle Relay, in which the team of Peregord, Hornbacher, Pierzecki and Kendall all had outstanding swims that led them to finish in third place in a stacked field of competition. This event was followed by another impressive third place finish from Breda in the 100 Backstroke. Next, in the 100 Beaststroke the Wildcats had two athletes qualify for finals: Junior Alyssa Yang finishing 23rd and Beringer finishing 11th. Capping off the meet, the team of Stoddard, Pierzecki, Breda and Hornbacher brought home a sixth place finish for the Wildcats. Head Coach Emily Weiner calls the meet, “A great success for the girls as individual athletes, as well as the team as a whole. It also has built strong momentum for us leading into the MHSAA State Championship Meet at the end of November.”

Heading to the State Championship meet in Holland on November 22nd for the Wildcats will be Peregord, Breda, Junior Lilly Orris, Kendall, Pierzecki, Beringer, Gullitti, and Hornbacher. The team has achieved qualifying times in all three relays and also has a collection of individual qualifiers. Peregord will swim both the 50 and 100 Freestyle, Breda will swim the 100 Backstroke, and Hornbacher will swim the 500 Freestyle. Kendall will be choosing her individual events from an impressive list of six events in which she qualified. Last year, she achieved All American Honors in the 50 Freestyle, finishing third in the state, and fifth in the 100 Butterfly. The Wildcats are looking to cap off a successful 4-3 season with fast swims at the meet this coming weekend. 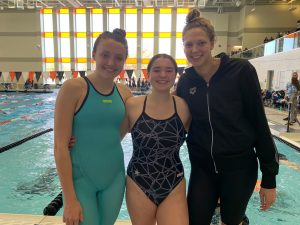