Carter won the MHSAA Lower Peninsula Division 1 individual championship at Michigan International Speedway with a time of 15:01.2, the fastest time in any division Saturday. In his career, Solomon won a team championship with Plymouth last year, Team Runners up the year before, made All-America at Foot Locker and put himself in select company by earning all-state for the fourth time Saturday.

Solomon placed in the top 18 all four years. The only boy to accomplish that feat in the MHSAA’s largest classification since separate team and individual races were discontinued in 1996 was Rockford legend Dathan Ritzenhein, who made the top five four years in a row from 1997-2000

Only two other boys have even been four-time all-staters in the top classification. 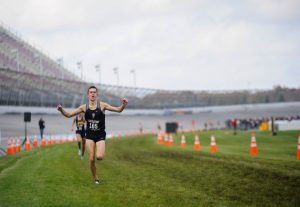 Maya had an amazing performance at our high kick competition on Sunday. She showed huge improvement and made her team and coach so proud! 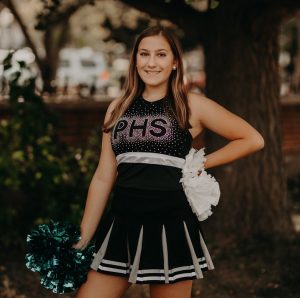 Josh played nearly every play in the ‘Cats 29-13 playoff victory against White Lake Lakeland, recording 5 catches for 81 yards and a touchdown. He also had 8 tackles at linebacker against a run-heavy Lakeland offense, leading the Wildcat’s tenacious defense. The 9-1 ‘Cats head to West Bloomfield on Friday looking to take home a district title.

Lily and Sam have done a great job setting this year as they both play key roles in the starting rotation. Setters are essentially the quarterbacks on the court. The past few weeks we have been working hard to learn a new offensive system, and they have embraced the challenge. Sam and Lily have really stepped up communications with their teammates before each serve to ensure everyone is on the same page with the offensive plays. They are also making smart decisions on set choices and pushing our offense to the next level. Keep up the great work as we head into Districts!